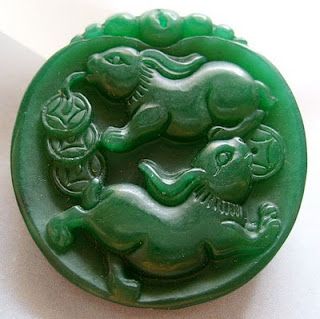 Most days when we walk the dogs at home we see hares. There is always something magical about them and on the occasions when I see one actually in our paddock, I feel privileged, even if they are eating the bark on my young apple trees. Cuddy* likes to see them too, although this is one of the reasons we are planning to move, so that we can have i) a dogproof garden and ii) live somewhere where we're not constantly surrounded by people waving shotguns (escaping dogs and gamekeepers are not a happy combination!).

Hares and rabbits have a long association with Easter - indeed, I suspect it was my enthusiasm for the Easter Bunny and his generosity with chocolate eggs which led to my having an imaginary friend who was a rabbit. Slightly smaller than me, she was a very girly rabbit, with a liking for bows on her ears and pink frocks with sashes. Her name was Bunny Dolores (that's Dol-lores with only two syllables, and there was nothing dolorous about her, so goodness knows where I got it from; I also had imaginary friends called Gary Susan and Old Sub, so your guess is as good as mine).

Later, I came across the Tinners' Rabbits, which at that time were thought to be associated primarily with the guilds of tin miners in Devon, hence their appearance in Devon's stannary churches. These three hares (because they are usually hares, not coneys) are conjoined by their ears in a constant-motion triskele, and appear in roof-bosses in churches in Devon and beyond. In a wonderful blog post  today on the mythology of rabbits and hares, Terri Windling talks about the Three Hares Project which tracked the hare triskele across Europe to India and China, finding that the Devon instances were nothing new. 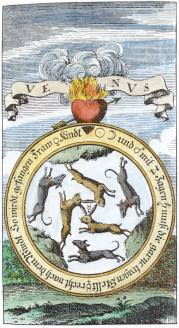 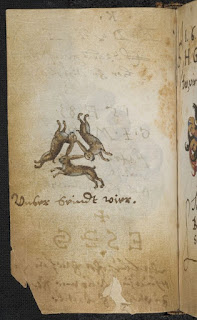 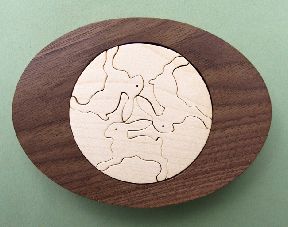 A modern Three Hares puzzle, by Will Witham

My own small tribute to the power of the three hares symbol is a Pinterest board called Tinners Rabbits, where I'm collecting images old and new for my own pleasure. A couple of other creatures have  crept in, I notice, where they seem to share a common source, and I haven't restricted my selection only to the triskele, finding many images which celebrate the mystical nature of these enchanting creatures (actually the board was originally shared with Green Men, but they got relegated somewhere along the way; the hares and rabbits inevitably demanded a space to themselves). 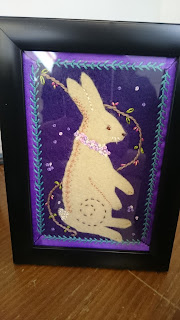 
*I think I should add that he appears to like the idea of playing with them; if they would just chase him back he would be so happy.
Posted by GeraniumCat at 16:44