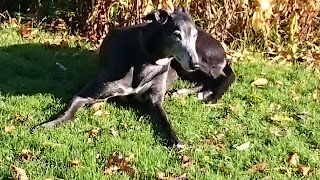 Last July when I resolved to be a better blogger I couldn't have made a bigger mistake. I'm not going to write about what happened here (if anyone really wants to know, there's a brief update on my About page).

I'm cautious, now, about saying I'll be here more regularly. For a start, there are now three dogs to be walked. Milly arrived in December and was an instant hit with Cuddy. Pip doesn't really care either way, except when someone else has the sofa and she wants it. 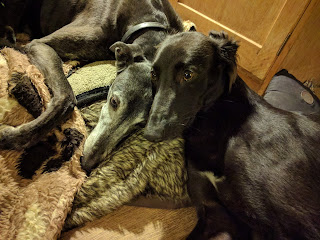 Pip is Senior Dog, and conscious of her status. She's not conscious of much else, in fact, and spends most of the day asking to be let out, then in, then out again. I saw a post on Facebook yesterday of a dog outside a French window with the caption "Let me in because I want to go out again." That's Pip. She's had mast cell tumours for several years - in fact, has lived far longer than we expected - but she is full of cheerful anticipation for walks and food and, at twelve, is quite a good age for a small brown lurcher. 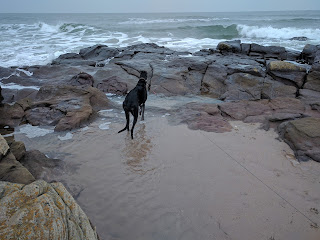 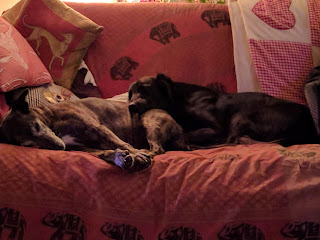 Pip and Milly do not snuggle. Cuddy will cuddle anyone, he's the cuddliest dog I've known. We should have called him Cuddles. I often do. He's also an escapologist. You walk near a fence with him and one minute he's beside you and the next - PING! - he's over it. And miles away. After a fox, a deer, a hare, a rook... we have to take him round the garden on a lead. Fortunately, Milly doesn't really know that she can jump, and Pip can't any more, so he goes alone, which makes him more inclined to come back. But lurchers and recall don't mix.

When Milly arrived she was highly neurotic - she's always hated bangs and loud noises, so I was a bit apprehensive about the move, as we are usually surrounded by bird-scarers. In Devon, she used to refuse to go for walks if she heard the steam train whistle - just dig her toes in and refuse to move. So we didn't make demands on her - if she wouldn't go beyond the garden we didn't push her, if she wanted to spend the whole day on my bed we let her. It's paid off, she is now much more confident and obviously sees herself as not just a member of the family but of the pack as well. I was also a little nervous about her reaction to the cat and the hens, but it's been okay. Indeed, she seems to rather like the Loki the cat, while the hens are generally ignored after an initial dreadful moment when she caught one and I thought she might have hurt it. But the hen was merely ruffled and Milly received one of her very rare tellings-off - they are so rare that it seemed to take immediate effect. The chickens are, wisely, still a bit wary. (In fact, I could wish they were more so, as we have a fox lives very close by.) 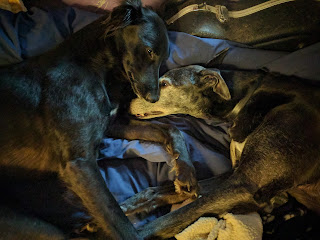 I like this one! (All but the first photo © Slink Jadranko)

Although my intention is to get back to blogging much more regularly, a mad decision to move house may interfere. We're only moving a few miles, to somewhere with slightly less land, and it won't happen for a couple of months, but it's going to be a very busy summer!