I was book-obsessed from the start, and some of my earliest treasures were the Little Grey Rabbit books by Alison Uttley, illustrated by Margaret Tempest. I adored the characters within these pages and the beautiful watercolours which depicted their daily tasks and amusements. They are probably largely responsible for the pleasure I take in middlebrow literature, where the mundane is of equal, if not more importance, than events on the world-scale.

Both Uttley and her illustrator understood this. The foreword to all the Little Grey Rabbit books is as follows:


Of course you must understand that Grey Rabbit's home had no electric light or gas, and even the candles were made from pith of rushes dipped in wax from the wild bees' nests, which Squirrel found. Water there was plenty, but it did not come from a tap. It flowed from a spring outside, which rose up from the ground and went to a brook. Grey Rabbit cooked on a fire, but it was a wood fire, there was no coal in that part of the country. Tea did not come from India, but from a little herb known well to country people, who once dried it and used it in their cottage homes. Bread was baked from wheat ears, ground fine, and Hare and Grey Rabbit gleaned in the cornfields to get the wheat.

The doormats were plaited rushes, like country-made mats, and the cushions were stuffed with wool gathered from the hedges where sheep pushed through the thorns. As for the looking glass, Grey Rabbit found the glass, dropped from a lady's handbag, and Mole made a frame for it. Usually the animals gazed at themselves in the still pools as so many country children have done. The country ways of Grey Rabbit were the country ways known to the author.

(The Foreword to the Little Grey Rabbit books by Alison Uttley)


The pictures are actually quite simple, but you feel as though there is lots of detail. Here, for example, is the lace border that Little Grey Rabbit made for Mrs Hedgehog, with its bees and flowers, and you can see the lace-making pillow with its bobbins on Grey Rabbit's lap. 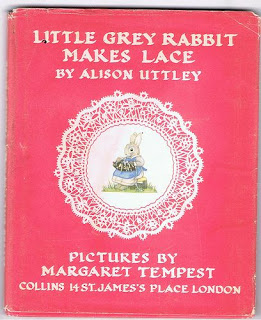 Margaret Tempest was born in Ipswich in 1892 and lived until she was 90. She was trained at Ipswich Art School and Westminster School of Art, graduating just as WW1 began. After the war she and a group of friends founded The Chelsea Illustrators - women artists sharing a studio to work, teach and sell art - the studio ran successfully until 1939.

During the twenties she began work on the Alison Uttley books, a partnership that lasted 40 years although artist and author didn't like each other (but Uttley does seem to have been extremely difficult - amazing that she could write such enchanting books, but I think she was probably happier while she was writing than the rest of the time). She wrote and illustrated her own books too, like the ABC below, and designed cards for Medici (78 in all) - the postcards are particularly fine, as the whole story has to be told in a single image. 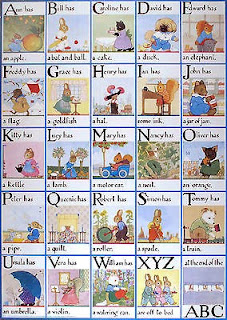 The illustration below, probably from Little Grey Rabbit and the Weasels, has a lovely William Morris sort of background. Apparently the distinctive coloured border that surrounds the LGR illustrations was Tempest's idea, and it is wonderfully effective, framing the miniature world of the animals - there's always a sense of being close to the ground. 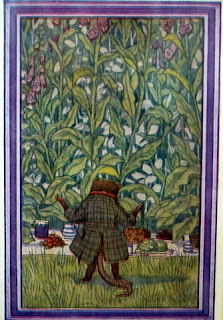 The borders made the dustjackets equally distinctive too, and even modern editions retain a strong sense of the originals. Here's the 1986 version of Little Grey Rabbit Makes Lace: 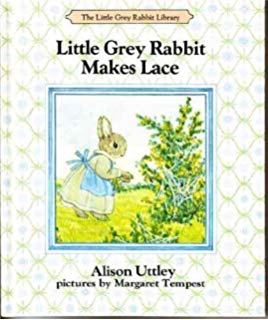 It lacks the lace-making detail that I liked so much and the lacy border, replacing them with the coloured border of the text illustrations which is the most easily recognised feature, along with the grey dress, blue pinny and crisp white collar and cuffs that Grey Rabbit (nearly) always wears. Even later illustrators of the series kept to these conventions. I particularly like this one, where her grey dress is kilted up, showing her delicious white petticoat below - she's actually hanging her pinny on the washing line. 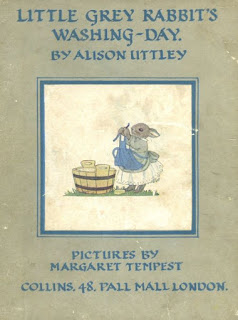 I can see the beginnings of all lots of my own character traits when I look at these little books, which are ideally sized for small hands. The original editions had endpapers showing the little house in the woods with washing gaily dancing in the breeze. I suppose many of the things I learnt to prize are deeply unfashionable these days - homemaking, pretty clothes, care for small creatures, country lore - but the books are still in print, though whether they please small children or nostalgic grandparents I don't know. 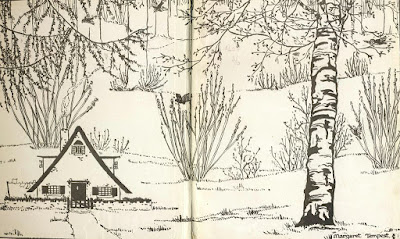 Margaret Tempest married her cousin Sir Grimwood Mears, a former Chief Justice in Allahabad, in 1951. They lived in Ipswich at 3 St Edmund's Road, where there is a blue plaque in her memory. She was an enthusiastic sailor and became Commodore of the Pin Mill Sailing Club. 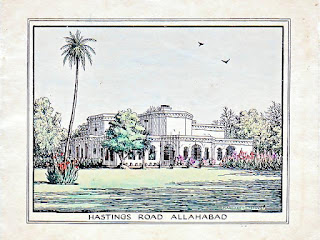 A website about Margaret Tempest lists her books and shows some of her other illustrations, but she will always be best remembered, I think, for Little Grey Rabbit and her friends.