I have a terrible tendency to muddle up the Aiken sisters: Joan Aiken (she of The Wolves of Willoughby Chase fame) and Jane Aiken Hodge. I guess I was reading both in my late teens and early twenties, they both wrote some regencies, their writing styles are not dissimilar, and while Joan wrote some Austen sequels, Jane wrote a biographies of Austen and Georgette Heyer... so when I thought last week that the book I was enjoying was by the Other One, I didn't feel I was entirely to blame for my confusion. 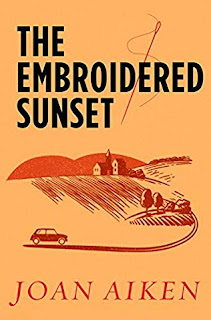 I started the week with The Embroidered Sunset, by Joan Aiken. Lucy, born in England but brought up by her uncle in the US after her father ran off leaves school to discover that her expensive education has apparently used up all her money so that her planned career as a concert pianist looks unlikely. However there's a chance that a famous pianist who is dying of cancer might train her, if she can earn enough to pay for lessons so she decides to work her passage to England as a ship's stewardess. Her loathsome uncle agrees to her plan as she can also check up on his elderly sister, who may or may not have died - if she has, he wants to stop paying her an annuity, and besides, he has an idea that her pictures just may be valuable. While most enjoyable, this turned out to be quite a dark little novel, and I'm still not at all sure what I make of the end. Lots of gothic overtones, deserted houses and rain though - you can never have too much of them, right?

What I did know, however, was that Aiken's writing was pleasing and was holding my attention, and I felt that I could do with more of it. So I turned to another of her books, only to discover that it was in fact by Jane. It was on my Kindle because Agora Books have been reprinting quite a number of authors I like - Michael Innes amongst them - and I'd spotted it on one of their emails. Well, I'd spotted the Aiken bit, at any rate... 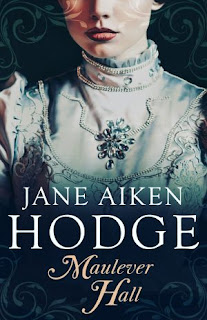 Maulever Hall has a lot of Georgette Heyer about it - resourceful heroine, in the case suffering from amnesia after a carriage accident, eccentric aristocrats, cross-country chases (so much more fun in a coach and four!), murdered heirs, dangerous suitors... what more could one ask? Marianne has no idea why she is fleeing in terror on a dark night with a child she doesn't think is hers. And where is she going? She's not even sure what her name or status is. Does she have a guilty secret? She manages to be at once both capable and gullible, and I thought this quite convincing - the one thing that is clear from what she can/can't remember is that she's country-bred, and has no experience of the ways of the city or the ton. And she has only her own feelings to tell her who and what can be trusted, and her memory of fear and pursuit. There's plenty of rain in this one too.

Which did I prefer? Well, actually, I was very happy with both, and as the nights here grow longer, am going to immerse myself in the gothic worlds of both Aiken sisters. Next up, Castle Barebane, by Joan - now there's a promising title!