The Anubis Gates by Tim Powers 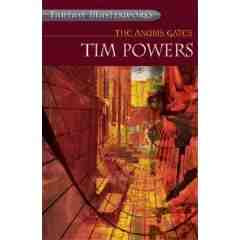 This fantasy novel, first published in 1983, was reprinted in the Fantasy Masterworks series, so I thought I really ought to have read it. It starts intriguingly with a young American historian, and expert on obscure poet William Ashbless, who has been sent for by a famous and wealthy entrepreneur to give a lecture on Samuel Taylor Coleridge. A number of other candidates have already been rejected; time travel will be involved and a degree of flexibility is required. It turns out that Brendan Doyle will need to be very flexible indeed, since he finds himself trapped and penniless in the early nineteenth century. Regency London would be dangerous enough, you might think, to a stranger, but Doyle not only becomes the prey of rival gangs of beggars, but finds himself pursued by gypsies and sorcerers. Worse still, Doyle knows that he will soon encounter Dog-Faced Joe, a werewolf who can swap bodies.

The juxtaposition of Egyptian sorcery with the squalor and shambles of Regency London was interesting, and offered plenty of opportunities for luridly gothic settings, from Romany tents to the thieves' den. I found the book increasingly problematic, however: the proliferation of Dog-Faced Joe's victims meant that I became uncertain who inhabited whose body, while the kas of the various sorcerers began to add to my confusion: there are too many characters and too much doubling. The plot didn't quite hold up under these complications, and my attention wandered a little in the later chapters – since there were times when something straightforward looked more attractive, I left it at home while I went away, and it was harder than ever to pick up the threads on my return. I also found a number of historical inaccuracies to be a mild irritant, though I appreciate that this is a fantasy work and not a historical novel.

Bearing in mind the date of publication, however, I think this an interesting piece of writing and I'm glad that it is still in print and therefore an accessible part of the canon. On reflection, I can see that the reason it sat for so long on my shelf was that I always viewed it with some suspicion. Nonetheless, it probably deserves a closer re-read at some point, and there were certainly aspects I enjoyed enough to make that possible.