The Court of the Air by Stephen Hunt 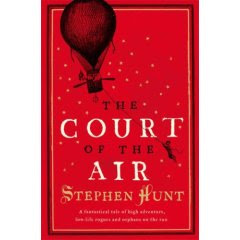 Other nations had dark gods and wild-eyed prophets that demanded obedience, child mutilation, slavery, and poverty for the people while wealth flowed to an all-powerful priest class. Jackals had its deity-free Circlist philosphy, quiet meditations and a wide network of oratories. A Circlist parson might drop round and request a quick brew of caffeel, but never call for the beating heart of the family's firstborn to be ripped out of its chest.

This is a book to linger over. Two young orphans, Oliver and Molly, are being hunted by ruthless assassins, apparently for who they are, although neither of them knows why. Help on their separate journeys comes from those on the fringes of society, outlaws, thieves, and exiles and steammen, mechanised and manufactured creatures which come in many forms, yet which have a soul. The young heroes are intelligent and thoughtful – Molly has been raised in a poorhouse by a Circlist who believed in education, Oliver has been forced by isolation to be bookish. These are qualities which are often ignored by novelists of late, apparently in the belief that young people are characterised by being difficult and sulky, kicking against duty and responsibility. These orphans accept the roles which seem to have been thrust upon them, their only reluctance born of their uncertainty that they might be unequal to their tasks.

I detect in Hunt's fluent and elegant writing the influence of Iain Banks's Culture novels, in the richness of the different societies, with their separate philosophies and religions, and particularly in the steammen, whose wisdom and age-old experience is reminiscent of the Culture's AIs in range and complexity. Hints, too, of Gibson and Sterling's underrated The Difference Engine, with its darkly gothic steampunk setting, and of Gibson's eclectic mix of religions (notably in Count Zero and Mona Lisa Overdrive), ninja side by side with voodoo; here, as in Gibson, they are transformed into something plausible and compelling, while the old gods of Wildcaotyl are pure Lovecraft. Also reminiscent of Gibson is the cast of minor characters with strong and distinctive voices. I was very taken with Mother Loade and her assistant, and the Gear-gi-ju master, Redrust. It's a creditable pedigree for a YA novel, though no less than one might expect from the founder of www.SFcrowsnest.com, a science fiction and fantasy website.

Absorbing and readable in its own right, as a YA novel, The Court of the Air may well encourage other reading in the same genre, especially among the authors mentioned above, while the underlying ideologies of the book's various cultures, well-stated as they are, should provoke some consideration of what constitutes a well-governed state. There is a good deal that is shocking in the story, and its quiet and matter-of-fact handling serves to accentuate the horror – the hideous plight of the King of Jackals, with his arms surgically removed so that he may never lift them against his citizens, will linger long after the book is finished. I liked the way in which detail is built up gradually, small pockets of information creating the bigger picture of a complex world. It's a book which demands close attention and some work on the part of the reader, which makes it all the more absorbing. The lasting impression is of a gripping adventure, warmly and compassionately told, and of two engaging young heroes. I am delighted to see that there is another book set in the Jackelian world due in May, The Kingdom Beyond the Waves.