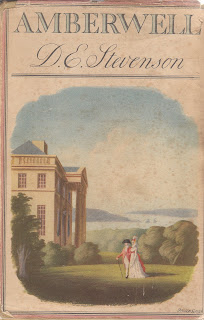 This author is noted for her comfortable and well-told stories, and Amberwell is a typical example of her output. Set in Scotland, it tells of the Ayrtons and their family home – the Amberwell of the title – up to and during World War II (the book itself dates from the early 1950s). It’s not a family saga – the first two centuries of the house’s existence are dealt with at a gentle pace in Chapter One: a leisurely description of the choice of site, the building and subsequent amendments to the house, and its grounds, introduces the family members by way of their discussion over the latest plan to enhance the garden. The extended household includes the cook, Mrs Duff, Mr Gray the gardener, the redoubtable Nannie amd various underlings. Mr Ayrton has married twice, his first wife dying after producing the two boys, Roger and Tom. Her successor, despite her determination to give her husband another son, has “only” managed three girls, and is so disappointed by the arrival of Anne, the third, that she disengages her interest from the nursery altogether, and the three youngest children are left, not untypically for the time, entirely in Nannie’s charge.

Their childhood is uneventful – unencumbered by school, the extent of the girl’s world is Amberwell, its inhabitants and their nearest neighbours, with the occasional incursion of the boys, home from school, or a visit from the dreaded Aunt Beatrice, who is almost universally disliked for her bossy and interfering ways. Nevertheless, it is Beatrice who eventually offers the chance of wider horizons to sixteen-year-old Anne, in the form of an extended visit to Edinburgh.

The eldest of the sisters, Connie, has recently married the son of a neighbouring family, and middle daughter Nell is left alone at Amberwell with her parents, entirely under her mother’s thumb, and with no expectations save those of becoming that object of pity, the unmarried daughter, unvalued companion to her mother and perhaps later, unappreciated aunt to her sister’s children. The advent of war, however, changes the comfortable existence of Amberwell, and provides a focus for the story.

This is a quiet book, not especially memorable or notable for deep characterisation, but satisfying even so. It’s one of those stories where the setting becomes an intrinsic part of its character, and Amberwell will remain as much in the reader’s memory as its denizens, a lingering recollection of gracious lawns and the gentle climate where Mr Ayrton’s ridiculous palm trees thrive.

D.E. Stevenson has a renewed audience now that Persephone Books have “rediscovered” her, and published Miss Buncle’s Book, but she was quite a prolific writer, and Amberwell is a reminder that good libraries, secondhand bookshops and the Internet may yield other titles to the diligent searcher.
Posted by Jodie Robson at 16:53

Email ThisBlogThis!Share to TwitterShare to FacebookShare to Pinterest
Labels: review