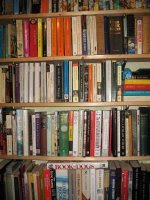 Unless by Carol Shields
Amberwell by D.E. Stevenson
The Rosemary Tree by Elizabeth Goudge
The Fashion in Shrouds by Margery Allingham - re-read
The Grim Reaper by Bernard Knight
Last Rituals by Yrsa Sigurdsdottir
The Children Who Lived in a Barn by Eleanor Graham
The Uncommon Reader by Alan Bennett
Thy Servant a Dog by Rudyard Kipling
Enchantment by Monica Dickens
Havana Bay by Martin Cruz Smith

Oh dear, not a single library book among these, as I didn’t have time to go to Berwick to choose any. Only eleven books in total, too – the month started with a Devon visit, where I read the Kipling and Bennett books while it rained outside, but it cleared long enough for a visit to the wonderful Hill House Nursery, where I took pictures for Cat Musings.

It was back to London mid-month, and to the unpleasant experience of minor, but miserable dental surgery so that, instead of spending the evening listening to music at St John’s Smith Square, I retired to my hotel room and spent a wretchedly sleepless night feeling sorry for myself. The next two days were a whirl of meetings and trains and, although I promised myself that I would do nothing more demanding than reading, I didn’t get through much. I had taken Unless with me to London, but it was too serious for my debilitated state, so at the station I bought The Grim Reaper by Bernard Knight, thinking that a straightforward medieval murder mystery would be preferable. A few pages in to this book, which is set in Exeter in 1195, this caught my attention:

De Wolfe was well aware of the Cornishman’s antipathy to religion, though. . . he had never discovered the cause of Gwyn’s phobia for the Church.

It was too much of an anachronism for me – the same thought could have been better expressed in language more appropriate to the setting. I enjoyed the Exeter setting – De Wolfe’s house is opposite a building where I used to work on the edge of the Cathedral Close (and, now I think of it, under another!) and, although Exeter was heavily bombed during the war, remnants of the medieval city are still there in its street names and churches, so I could follow the characters around in my mind’s eye. While not being terribly impressed by this series, I do like books about places I know, so it kept my mind off my troubles until I got home, where I embarked on a bit of serious comfort reading.

I’m still on my marathon read through the Campion novels, and The Fashion in Shrouds was a re-read to keep the order more or less correct. It’s notable for the very welcome return of Amanda from Sweet Danger, who cheerfully appointed herself Campion’s sidekick in the earlier book, and is equally determined on the role in this one. We learn just a little more about Campion’s background in this one (which is set in the fashion house where his sister Val works) mainly through a chilling letter from his mother.

The Monica Dickens book felt like a bit of an oddity. She is mostly remembered for three splendidly funny books about her early work experience: One Pair of Hands, which describes a period “in service” working as a cook general, One Paid of Feet, in which she was working as a nurse, and My Turn to Make the Tea, about being a junior reporter on a local paper. Her novels, both for adults and children, are often concerned with social issues, so that An Angel in the Corner, about a young woman who marries “out of her class” is a fairly sombre read. Enchantment, despite its title, is another such, about a young man of no great ability or intelligence, and bullied by his father, who escapes from his dreary life as a junior counter assistant in a department store by spinning stories in which he is hero. His spare time is spent on role-playing by correspondence (this is before the days of computer games), and his increasing difficulty in maintaining a boundary between gaming and real life brings him into contact with someone who might just be seriously dangerous. Dickens seems to be genuinely interested in the “little” people she writes about, and they are convincing even when unsympathetic. I couldn’t like Tim – in fact, I often wanted to give him a good shaking – but he held my attention to the end.
Posted by Jodie Robson at 15:29