The Lost Garden by Helen Humphreys

Look at this! It’s only 17 July, that’s less than 3 weeks into the Third Canadian Book Challenge and here I am posting my first review! In reality, it was entirely serendipitous – I was whizzing round the library choosing a few books to keep me going over the weekend, mostly crime novels, when I spotted a plain white spine with the title, The Lost Garden. I hadn’t heard of the author, Helen Humpreys, but the blurb sounded promising: a young woman leaves London and the Blitz to run a garden in Devon manor, part of the Dig for Victory campaign to provide Britain with sufficient homegrown produce. There she meets a young Canadian soldier who will soon be posted to the front. Sounds like my kind of book, I thought, and added it to the pile.

What I hadn’t expected, when I opened it at home and flicked to the inside back cover to look at the author description (something I always do), was that the author would turn out to be Canadian novelist and poet, and so provide me with the first of my books for the challenge. It proved to be a good start, too. Humphreys based her third novel on her own family history: her paternal grandfather, who was in the RAF, disappeared during the war, while her mother’s father had in old age restored a lost garden, and she weaves these two threads through the story of her shy young horticulturalist, Gwen, to create not a ghost story, as such, but a story peopled by ghosts, from the white apparition which may or may not be responsible for the theft of Gwen’s chickens, to the lingering ghost of Virginia Woolf, once glimpsed walking in the dusk through Tavistock Square, and now missing from home and feared dead. Gwen, alienated from the Land Girls in her charge by her feelings of social inadequacy, writes letters in her head to Woolf, while she sleeps under another heavyweight literary treasure, The Genus Rosa, by Ellen Wilmott, a rare and precious book then as today.

This is a slender novel, only 182 pages, and it reminded me a little of the book we read last year in the Cornflower Book Group, A Month in the Country, by J.L. Carr. Both bring an intensity and immediacy to a distant event, although they eschew the epic sweep of the war novel to focus, in this case, on those who wait: for orders, for the missing, for love.

The Lost Garden was a Canada Reads finalist for 2003, deservedly, I think. I’m adding a 2009 finalist to my list for the Challenge, a book I have wanted to read for years – watch this space to see which it is. 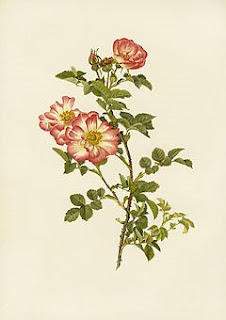 Here, Gwen is talking about the difficulty Wilmott had with the classification of roses, while at the same time celebrating the lyrical beauty of their names:

The language of roses shifts like sand under our feet. It blows in and out like the wind. It carries the fragrance of the flower and then it is gone. Rugosa. Canina. Arvensis. It is how we learn to speak about something that is disappearing as we say its name. It is a trick, a false comfort. Humilis. It is what we think we need to know and how we think it needs to be known. Involuta. It is where we want to go, this name, and stay there, safely held forever. Inodora. Alba. Sancta.