The Ice King by Helen Slavin

I haven't been reading many new books recently - since the advent of ebooks there is so much being reissued from my favourite period (roughly 1930-70) that I can barely keep up. There is a small and select band of authors who get bought automatically, though: Ben Aaronovitch, Jodi Taylor, Alan Bradley and Jasper Fforde get pre-ordered, and Nicola Slade and Linda Gillard are close behind. Pretty much anyone else will languish on the to-be-read list, sometimes picked up from the library, but it may be years and a growing sense that I really ought to read a particular work before I get round to it. I've said before that I'm very resistant to the books absolutely everyone is talking about, unless it's an author I already know I like. So making it onto my radar is quite difficult. But I do get newsletters from some publishers (usually the ones with long reissue lists) and I do actually read them. I also, of course, read blogs, but I'm aware that everyone else's taste is necessarily as idiosyncratic as mine, so although they may rave about a book, that doesn't mean that I'll like it. I'll probably wait for a consensus by several people whose views I really trust before forking out some of my limited book budget. 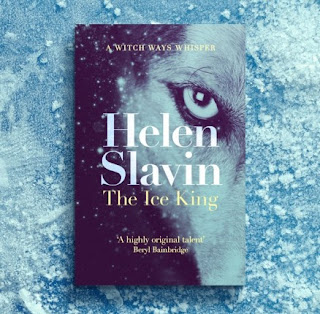 Which is a long-winded way of saying that someone new got through the barbed wire fence and the pack of guard dogs and the attack squirrel and shinned up to my tower window (yes, I do have a very small tower...). And that author is Helen Slavin, who has written a novella, The Ice King, that I'm eager to talk about.

First off, isn't that a seductive cover? I'd certainly have picked it up in a bookshop. That eye is full of promise - is it a threat? or what? there's both danger and candour in that gaze. And what happens to the main characters is like that too.

The story is in three parts and focuses on three different people. The first we meet is Hettie Way, the Gamekeeper. That capital initial is important. The extent of her role isn't divulged here, but we know that she protects Pike Lake and the wood around it, and her link with the land and what lives in the lake is important. It's not entirely clear whether she's protecting it, or protecting everyone else from it. She's certainly trying to protect her 9-year-old daughter, Vanessa, who is drawn to the lake despite being told that she should stay away, and must not, ever, go into the water. Being drawn to something is a guarantee that orders will be disobeyed, and Vanessa does, in a spirit of scientific curiosity, go into the water.

Part 2 takes up the story of Lachlan Laidlaw who, in the early years of the twentieth century, is in love with a girl who's a bad lot. She wants him to take her to the Goose Fair (echoes of Lud-in-the-Mist and Stardust, two of my favourite books). It doesn't go well, but Lachlan has a brush with a fortune teller.

Part 3 takes up the story of the grown-up Vanessa, now a scientist on an expedition to the northern wastes of Norway with her supervisor and a bunch of exceedingly unlovely male scientists. Echoes of all sorts of things here, since a research station is pretty much just that - claustrophobic and vulnerable to weather and communications failures and all that those entail. And bears. Vanessa discovers a body in the ice and things don't go well from there.

How the lives and stories of the three people we've met entwine to make an atmospheric and scary whole is the stuff of folklore and legend and our most atavistic fears. The Ice King has some genuinely heart-in-the-mouth moments and leaves unanswered lots of intriguing questions, which is fine as it's the prequel to further books about the Way family. I found myself impatient to know more about the Lake and woods and how the magic within them works: what it costs its Gamekeepers, how it's inherited, whether it can co-exist with Vanessa's science? This is exactly the sort of book I like, the kind you find yourself thinking about after you've finished. And the kind where magic is woven into the natural environment and isn't something to be learnt by going to wizard school or reading a grimoire or whatever - not that I can't enjoy some of that too, but this feels like the Real Thing.

**Edited later to say I have no idea why the formatting changed in the last para! How infuriating!
Posted by GeraniumCat at 18:05