I've been tagged for a meme by Angela at Writing, Life and the Universe. I'm afraid any regular readers are going to find my answers a little repetitive but, hey, we're all obsessives here, aren't we?

1. Who’s your all-time favourite author, and why?

This is a the sort of question that send me into agonies of indecision. Jane Austen. No, Elizabeth Goudge. Can I have both? Jane's qualities are obvious, and I don't think I need to explain why she heads the list but, while quite a few people know Goudge for The Little White Horse, her books for adults are rather less well known. I find them inspirational, and they are books I turn to in dark moments. Sometimes the inner demons with which her characters battle are brought about by conflict and war, as in her novel about the Civil War, The White Witch; at other times they are relatively small and personal - perhaps the constant pain of arthritis, or even a simple clinging to vanity - but to both she brings insight from her own experience, understanding the physical misery and lassitude which accompanies psychological struggle. Shining through her writing is a conviction that pain and doubt can be overcome and that faith will be rewarded. Her animal characters are good too.

2. Who was your first favourite author, and why? Do you still consider him or her among your favourites?

T.H. White. At the age of eleven or twelve White's Once and Future King introduced me to 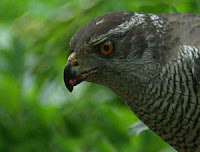 the joys of Arthurian legend, medieval history, falconry and romantic love; the second book, The Queen of Air and Darkness contained the single most shocking image of dark sexuality – appropriately to result in the birth of Mordred - I had ever met at that tender age. Still a favourite? Absolutely, I'm nothing if not loyal. The conversation between the hawks in the castle mews is superb, and later I read The Goshawk, his wonderful book about training a hawk.

3. Who’s the most recent addition to your list of favourite authors, and why?

Angela Thirkell, on the basis of August Folly and Before Lunch. I have two more waiting to be read, but I love her writing so much that I am saving them up. She writes that cosy middle-class world in which I know I'm most comfortable; her characters are attractive but flawed, and the way in which their foibles are visited – often inadvertently - on others are familiar from the worlds of Pym and Austen. I admit she doesn't challenge but, for me, her books are pleasure from first page to last. More good animals, too, in August Folly, with Gunther the cat and Modestine the donkey. I'm very happy to know that there are another 26 to go when I've read the two I already have.

4. If someone asked you who your favourite authors were right now, which authors would first pop out of your mouth? Are there any you’d add on a moment of further reflection?

Apart from the Misses Austen and Goudge? Well, actually, there are quite a few: Barbara Pym, Joyce Windsor, Victoria Clayton, Georgette Heyer. Then we head off into the darker realms of fantasy: Mervyn Peake, William Gibson, Neil Gaiman, Alan Garner, Iain M. Banks. William Mayne, who wrote a trilogy for children about Canterbury Choir School, bridges the gap between the two worlds with his own take on the Arthurian legends in Earthfasts. Not so many animals here, but in his Culture novels Banks writes splendid artificial intelligences, especially in Excession, where you can listen in on spaceships bickering!

I'm not going to tag anyone else but, if you haven't done it, and you'd like to, please play along.