The Penelopiad by Margaret Atwood 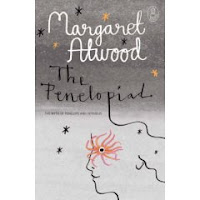 I think I'd better come clean at the outset and say that I am fairly ambivalent about Atwood (though, after much patience with their website, I've got a ticket to see her at the Edinburgh Book Festival, which I'm rather pleased about). I have several friends who write very knowledgeably about her work, and make me aware how much I miss so that, while I hate The Handmaid's Tale, I know that it's a tremendously well-written book. The last of her books that I really enjoyed was The Robber Bride. Oh, and I enjoyed Strange Things, the volume of lectures that she gave at Oxford, though it's the worst piece of copy-editing I've ever come across. One of my problems is that her distinctive whine-y voice comes through in every book, however well constructed it is.

So I'm happy to report that I enjoyed The Penelopiad and, although the Voice is there very strongly, it feels true to The Odyssey at the same time as it subverts it. Atwood's research on Penelope usefully brings together the stories about her birth and family, neglected by Homer, but probably familiar to his audience in a way that it no longer is for a modern audience. I was less keen on the modern references in Penelope's "long view" – it is told in the present day by her ghost, a conceit I found a little contrived, although it allows her to brood on the different ways in which she and her vampish cousin Helen (of Trojan fame) are remembered today. As a one-time student of Greek theatre (I played Antigone's lesser-known sister, which makes me rather sympathise with Penelope) I found the chorus of maids, providing ironic commentary on the events, effective and dramatically-pleasing, especially in their indictment of Odysseus, with its allusions to Robert Graves' The White Goddess.

To the reader familiar with the works of Graves and J.G. Frazer there is nothing very new in Atwood's "feminist" re-working of Penelope's story, but to our celebrity-obsessed world it offers a witty and ironic exploration of the very nature of mythologisation. As part of Canongate's Myths series it is a worthy contribution, and should be high on the reading list of anyone interested in...oh, almost anything really: mythology, religion, the history of western culture, the way people think...The Penelopiad reminds us how much our life now is grounded upon the stories we invented long ago to explain the world around us and that, however much our material circumstances may change, people don't.

My father was King Icarius of Sparta. My mother was a Naiad. Daughters of Naiads were a dime a dozen in those days: the place was crawling with them. Nevertheless, it never hurts to be of semi-divine birth. Or it never hurts immediately.

Reading this work helped me to make up my mind about what to tackle for John's Second Canadian Book Challenge: I'm going for the McClung, and Atwood will be represented in my choices. The Penelopiad, however, makes a belated addition to the first challenge; it was also one of my choices for the One Upon a Time II Challenge but, although I completed reading it in time, I was too late to post about it there.
Posted by Jodie Robson at 18:00