The Other Side of the Bridge by Mary Lawson 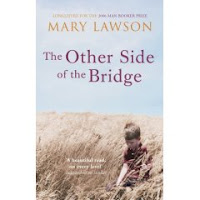 This is a book which alternates between two viewpoints: the first, in the 1950s, belongs to Ian Christopherson, son of the doctor in Struan, northern Ontario, who is in love with the wife of a local farmer, Arthur Dunn. The other viewpoint is Arthur's, in the 1930s, and relates the story of his relationship with his younger brother, Jake. Jake, born after a stillbirth and considered frail by his mother is sensitive, intelligent and difficult, while Arthur is stolid and dull. Unusually, the author chooses to focus on the plodding but reliable brother, drawing us into Arthur's struggles to overcome his resentment of his younger brother, who has a talent for getting him into trouble, and this is one of the compelling aspects of the novel. While we can't help but empathise with Arthur, we see through his eyes the frustration felt by the younger brother, Jake's desire for education and experience, at all times constrained, despite his mother's favouritism and support, by the needs of the farm: "Farming's important." His father says, "Work's important. Time he knew what matters and what doesn't." Arthur knows, all he wants to do is leave school and get on with working on the farm, although it takes catastrophe to bring it about.

Running parallel to Arthur's story is Ian's. Growing up in a small town, he is constantly aware of the expectation that he will follow in his father's profession, and it rankles. He, too, desires experience in the wider world, although he rejects an opportunity to leave. He takes a Saturday job on Arthur's farm, not because he is interested in agriculture, but to be near Laura, Arthur's wife. Like Arthur, Ian will face desertion and loss, and will have to shape his life accordingly.

Mary Lawson creates a convincing and compelling portrait of a community, depicting the complex relationships, both loving and destructive, of ordinary people, with a painstaking and absorbing conviction. Often painful, it is utterly enthralling, and on my second reading I find myself as completely caught up in events which seem as fresh and immediate as they were the first time through. Her characters are minutely detailed and true. I can't recommend this, my last contribution for the Canadian Book Challenge, too highly. Even better than her first book, Crow Lake.