Hue and Cry by Shirley McKay 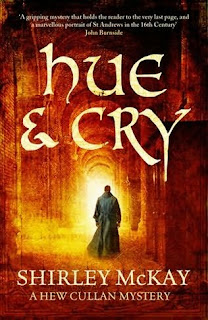 I get an inordinate amount of pleasure from discovering a new mystery series. I’m not absolutely certain why this is: something to do with the way in which the reader is drawn quickly into the story and the knowledge that it will end with the necessary ends tied up neatly, but enough left loose to provide a way into the next one, perhaps? However, after I’d read my way through Brother Cadfael by the mid-1990s, library visits always began by returning a batch of imitations which had been found wanting.
Until recently, the only series I’d found which came anywhere close to satisfying were Fidelis Morgan’s – which started with Unnatural Fire and recounted the riotous adventures of Anatasia Ashby de la Zouche, Baroness Penge, Countess of Clapham and her maid Alpiew – and the famous one by Lindsay Davis starring M. Didius Falco, informer to the Emperor Vespasian and harassed paterfamilias. The library shelves offered more, but most of them left me disappointed, usually because I felt that setting and characterisation were lacking. So recent riches please me enormously and Catriona McPherson, Carola Dunn, Cora Harrison and Pat McIntosh all more than meet my requirements and I can imagine few greater treats than to settle down with a new book by any of those authors. (Nicola Upson and Jacqueline Winspear should get an honourable mention here.)
Hue and Cry, Shirley McKay’s first book about sixteenth-century St Andrews and lawyer Hew Cullan is another gem. In 1579 Hew has just returned to his home town from France, and he’s concerned to find his friend Nicholas not only ill but accused of murdering a student. In the small community that comprises town and gown Hew of course sets out to investigate, with the very necessary help of his sister Meg and physician Giles Locke, only to find that they are all at risk of bringing down the wrath of the Kirk on their heads.
What we have here is good plotting and characterisation, with the added interest of the technicalities of Scottish law which require extra ingenuity on the part of the author. There’s a leavening of humour (generally centring around the intractable horse Duns Scottis), and some period colour in the shape of James VI, just 14 here, but later notable for his views on, amongst other things, witchcraft. Language is used beautifully – there’s no requirement to understand dialect but the use of metre captivated me: the flow of dialogue often falling apparently naturally into the rhythm of the common metre which was to become the characteristic of the Scottish Psalter 50 years later. I thought, too, that McKay handled the thorny issue of modern sensibilities in period characters with great deftness
My only criticism? No map. I want a map. That apart, a stunning debut, and one to read again. The second book, Fate and Fortune is also out, with a third on its way.
Posted by Jodie Robson at 16:57