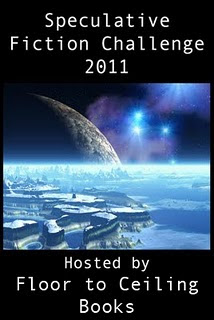 Magemanda at Floor to Ceiling Books has just announced the Speculative Fiction Reading Challenge 2011. Okay, so I told myself I wasn't going to sign up to any new challenges for next year, but just keep going with the ones I always do, but I don't have to change any reading habits for this one. In fact, it looks like a good way to make some dents in the TBR pile, and some of the books can be shared with other challenges, so I'm ignoring the possibility that my impulse is borne of cabin fever because I haven't been able to get out since last Friday (when actually, I got in - just), and taking my mind of the duvet of snow outside by making that old favourite, a book list.

The challenge lasts throughout the year and all that's required is to read and post about 12 books which fit within the speculative fiction heading - surely even I can manage a post a month! There are several likely contenders for the challenge. These include Spook City by William Gibson which I've had for ages, but I love Gibson so much (I may have mentioned this before, like, ad nauseam?) that I can't quite bear to read it. When I do get to it, I'll probably read Zero History too. End of the World Blues by Jon Courtenay Grimwood is another that I've had for a while. Like Gibson, I tend to stockpile his books, because they're so good. Older son has just finished it and was raving about it.

Player One by Douglas Coupland  - have a feeling I might struggle with this, but I want to read it. I like the idea of turning the Massey Lectures into a 5-hour, real-time novel, but I've read reviews that say it gets a bit bogged down. Hmm, we shall see. Oryx and Crake (Margaret Atwood) has been on the horizon for quite a time too. Started it once and it really is time I finished it. I feel there's an end-of-the-world kind of theme developing here.


Changing tack a little, there's also Old Man's War by John Scalzi - I've just discovered Scalzi, as younger son bought me The Android's Dream for my birthday last month. I needed something really gripping to distract me from my cold and it was the perfect choice, I loved it. Finally, Kraken by China Miéville has been on the wishlist since I read The City and the City earlier this year (another superb book).
Okay, that gives me seven probables, so there's plenty of room for impulse buys (memo to self: remember financial constraints i.e. impending poverty), library books and, if I'm lucky, the odd review copy. The only problem now is quelling the urge to get started this minute.
Posted by Jodie Robson at 12:52