Welcome to the Virtual Advent Tour, Day 9! The Virtual Advent Tour is hosted by Kailana from The Written World and Marg from Adventures of an Intrepid Reader and is a way for bloggers to share gifts and memories with each other about our holiday seasons - a sort of grown-up advent calendar.
Other posts today:
Gretchen @ Scarlets Letters
Heather @ Capricious Reader
Darcy @ Foxed

With grown-up sons and no family nearby, our Christmases are pretty quiet, so I wondered what I might write about for today. Then I realised that I could share with you my major interests - books and folklore - with a Christmas extract that relates to folk customs or traditions. So, here is Kenneth Allsop on gathering the holly to decorate the house: 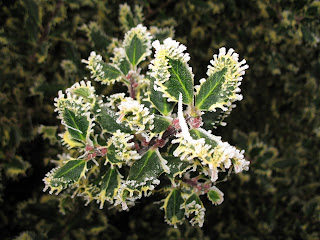 "So off through the frost-crackling mud my children and their friends went to bring back the bounty, and I made for the coppice to see about the trunk section that I had ear-marked as being a likely looking Yule log when I had been picking up lighter stuff. Sloshing through the pulpy leaves I came to it. Just what was needed. That would have roasting flames roaring up the chimney. But I was lacking one minor essential: a horse team and chains. Perhaps I should have dished out the tasks differently, seen to the holly myself and left the hauling of the log to all those restless young muscles.
I slunk back to the house and applied myself to the urgent reading of a review book at the fireside. It was considerate of me, I decided, to let the children get the holly. As they sorted it out in the crowded kitchen, plaiting a garland for the brass knocker and hanging it over the fire's cross-beam, they would be enacting fun and mystery as 'the rising of the sun and the running of the deer'.
Those words of The Holly and the Ivy were first recorded by folklorist Cecil Sharp in Gloucestershire; other versions were found in Somerset. It was sung in English villages long before it became a carol - perhaps long before Christ's birth, although holly leaves came to represent his crown of thorns. The word holly merged with 'holegn' and then the 'holm' which occurs in so many place names.
The original pagan symbolism was the entwining of the masculine holly with the feminine ivy, and the wreaths were hung where young men and girls danced at this pause when the sun is at its farthest point from the equator. 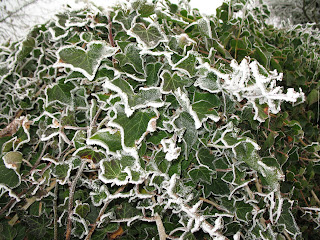 When the ice-armoured earth seemed dead, this was the sacrament to life continuing and rebirth in spring.
I heard the youthful voices returning across the field and looked out of the window. Across the lattice of bare branches in the afternoon's deepening iron light I saw our commonest evergreen shining scarlet, a lamp held up bright through the darkness of the winter solstice."
There is another tree in England which is associated with Christmas: the Glastonbury thorn, crataegus monogyna Biflora. The original tree is said to have originated when Joseph of Arimathea visited Britain after the death of Jesus. In the isle of Avalon, at what is now Glastonbury, he rested, and stuck his staff in the ground. By morning it had rooted, and ever afterwards it flowered at Christmas. In 1752 the villagers gathered around the thorn on Christmas Eve to see if it would bloom - when it didn't, they took that as proof that the recent Act of Parliament, when Britain switched from the Julian to the Gregorian calendar and lost 11 days in the process, was against nature - "Perliment didn't change t'seasons when they changed t'day o' the month" - and many people refused to go to church on the new Christmas Day. It took over 100 years for everyone to accept the new calendar, and although Twelfth Night, the Feast of the Epiphany, is mostly celebrated in the UK simply as the day on which we take down the Christmas decorations, "Old Christmas Day" has greater significance in Atlantic Canada, and many customs which have faded here survive more strongly there. 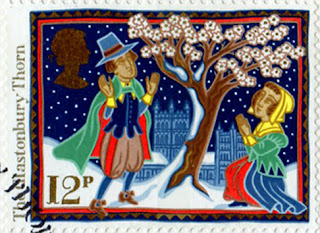