Relics of the Dead by Ariana Franklin 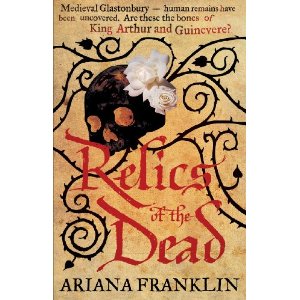 Relics of the Dead picks up fairly soon after the second in Franklin's series about Adelia Aguilar, The Death Maze, left off.* Adelia's friends are anxious to move her from the Cambridgeshire fens, where her medical practice has begun to attract unwelcome attention, and neither she nor Mansur are safe. Fortunately, her friend Emma  - Lady Wolvercote - is about to set off for Somerset, to her mother-in-law's house, and it is clearly expedient for Adelia to accompany her. As they approach their destination, though, a messenger from King Henry arrives to demand Adelia's presence - his mistress of the art of death is needed again, this time to determine whether two skeletons dug up at Glastonbury are those of King Arthur and Guinevere. Henry wants to scotch the story that Arthur is not dead but merely sleeping, in order to keep the rebellious Welsh under control. Adelia knows that it is virtually impossible for her to prove that the skeletons are Arthur and his wife Guinevere but, recognising that she has little choice in the matter, agrees to examine them.

In Glastonbury she meets with hostility, as well as the unwelcome news that Emma has failed to arrive at her mother-in-law's Somerset manor, although she had only a short journey remaining when Adelia left her. Enquiries meet only with denial - she and her entourage seem to have disappeared without trace.

Although Ariana Franklin makes a reasonable case for her female doctor, you have to suspend a good deal of disbelief with these books. That said, there are plenty of rewards for doing so. You can't help but admire Adelia, for all her obstinacy, so that the loyalty of her friends, and even Henry's determination to keep her at his disposal, is convincing. All the characters, including Henry, continue to grow and develop - in the case of the king there are further insights into his ruthlessness, a necessary part of his desire to govern well. An element that caught my sympathy in this third book, already to some extent touched on in the first two, but developed and explored here, is that parallel between the fictitious Rowley, Bishop of St Albans, and the real Thomas Becket, murdered at Henry's instigation when he refused, once he became Archbishop, to defer to Henry's power. The very real dilemma of king's law versus church law makes Rowley's efforts to be a good churchman into a strong theme, although you wonder whether Henry would have been willing to risk creating another Becket. On the other hand, as depicted here, perhaps he couldn't afford not to. Incidentally, Franklin provides Henry with these strong, domestic - but fictitious - allies, without too much risk of changing the course of history. They were interesting times.


* I reviewed the first, Mistress of the Art of Death, here.
Posted by Jodie Robson at 16:25